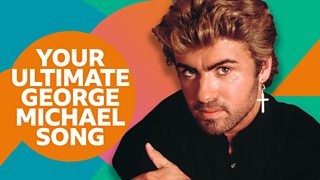 Back in 1982, the George Michael-penned Young Guns (Go For It) was his and Wham!'s first UK Top 40 hit. Formed with his friend Andrew Ridgely, Wham! went on to have five UK No.1 singles, ten Top 10 Singles and spent 203 weeks in the Top 75. The artist, born Georgios Kyriacos Panayiotou, later launched a hugely successful solo career with Careless Whisper in 1984, enjoying seven UK No.1 singles, 23 UK Top 10s, and spending 309 weeks in the Top 75.

So to mark 40 years of George's songs, written both during his time in Wham! and as a solo artist, we'd like you to choose your ultimate George Michael song from the shortlist below...

Songs are listed alphabetically by title, alongside year of release. Eligible songs for our shortlist must have charted in the UK Top 75 and be composed by George Michael (on his own and as a co-writer).

The Shortlist in Full:

Artist is George Michael except where mentioned in brackets. Year of first release is in brackets.