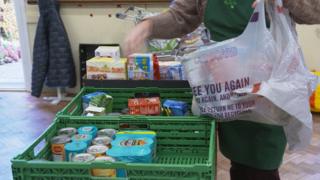 Almost 2,000 families with children are relying on daily food support from charities, according to a new report.

The Trussell Trust - which runs food banks across the UK - say they have had to provide around 2,000 food parcels a day to children whose families are struggling to afford food during the past six months.

Food banks are a bit like supermarkets, but the food there is free. They are for people who struggle to afford to buy enough food to eat.

2020 saw a record number of food parcels handed out, with demand doubling during the coronavirus pandemic.

Fewer families have been reliant on food parcels this year, but demand is still higher than before the pandemic.

'Record numbers of children have needed food support during pandemic'

All primary school kids in Wales to get free school meals

Rashford: 'I want to do more to help'

How many people are struggling?

According to the Trussell Trust, between the 1 April and 30 September this year, food banks supplied more than 935,000 emergency food parcels to people struggling to afford essentials.

Just under 40% of those parcels went to children, and the charity says they distributed, on average, over three parcels to people in crisis every minute.

Recent research by the charity, The Food Foundation, suggests that 2.5 million children lived in households which didn't have adequate amounts of food to eat between February and July this year.

This number is almost a third higher than before the coronavirus pandemic happened.

The Trussell Trust have said the need for emergency food is expected to rise further during the winter, with their food banks facing giving out more than 7,000 food parcels every day in December.

Where do families get help?

Families can visit places called food banks if they don't have enough money to buy food.

A food bank provides people with everyday items like pasta, tinned food and cereals. They also give out other essential items like toilet paper, soap and shampoo.

Most of these items are donated by members of the public.

Organisers will ask for the items they need to be donated - for example, they will say if a particular food bank is short on tinned food or shower gel.

Why is food so important?

Lucy Jones is a dietician, and explained why food is so important for our bodies and our minds.

She said that food helps our minds to function - for example when you're five, half of your daily energy needs are taken up by your brain and that's because it requires so much energy to grow and develop.

Young people have really high energy needs, and that means regular meals are important in allowing us to meet the nutritional demands in our body.

Lots of studies have taken place and show that children who eat regular meals are much more likely to meet their nutrient needs compared to people who don't have regular meals.

For some children who come from families who don't have a lot of money, they might get their only hot meal from their school meal and that's why it's considered really important that there's an option to have hot meals at school.

What does the government say?

A government spokesperson told Newsround: "We are committed to supporting people on low incomes and the changes we have made to Universal Credit will see nearly two million of the lowest paid better off by around ￡1,000 a year.

"The most vulnerable, including those who can't work, can get additional help with essential costs through our new ￡500 million support fund."

According to the government, the ￡500m support fund will be available to vulnerable households across the country to help them with essential costs over the coming months as the country continues its recovery from the pandemic.

Budget October 2021: What is it and how does it affect me?

Strong winds cause huge disruption across the UK

Could YOUR logo be lifting off into space?

Wales and Scotland could face-off for a World Cup place

1 hour ago1 hour ago
Newsround Home